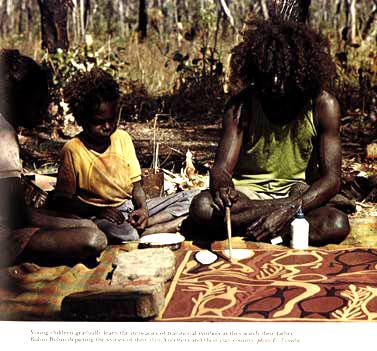 Extraordinarily creative people (partly because of the climate and the infertile ground), the aboriginals try to save themselves by art. This one is not for them a playful activity, but the actual condition of the existence of the world. Their art does not represent beings or things : it realises them.
Before 1970, the majority of the representations were sacred and it was prohibited to show them to the laymen; one preserved secretly certain ritual objects, but the paintings on the ground and the bodies were to be completely erased. There also existed, in parallel, this creative tradition by which individuals propose - sometimes in cave paintings or engravings on bark - new mythical stories. Accepted by the community, these "writings" were then preserved like alive testimonys.

Since this date, a very great number of aboriginals - who became for the majority sedentaries and half-breeded - started to paint frantically on canvasses and to sell them to the Westerners. At present, their paintings reach the art market at amazing prices. What they are losing socially, they try to re-inject it in their individual life. Their works became, seemingly, secular. But all take their source in the initiation, sometimes very long, that the aboriginals underwent during their adolescence. Painting simply became the privileged rite of a new historical situation where the aboriginal, at the same time, need to be recognized by Occident and to teach him, as Rimbaud said, what is the true Life (since Dreaming is literally at the opposite extreme of the dominant Western metaphysics which, not believing any more in miracles, refuses to integrate those who believe in them and thus produces death everywhere).

André Breton had perfectly seized all the surrealist originality of this painting which plunges us to the very sources of the writing. The pictograms are there in fact concepts of cosmic metamorphoses Painted initially on the ground and while turning around, the works are always to be looked from top to bottom and of a reversible circular motion, i.e. from the point of view of any creator. «Our paintings are telegrams of the heart, says one of these painters. All the Animals,and all the Plants joined together one day to establish the Law. We try to learn to the White this significance of our common Earth.» These penmanships of affects symbolize vectorial connections and not proportions. They are universal topological graphs. Glowczewski brings closer this four-dimensional geometrical structural design, where it cannot exist a privileged pole and for which our realistic dichotomies outside/inside,above/under or front/back are not relevant any more. The characters are thus often represented in a cubist way or by "x-rays" (according to the aboriginal expression); in fact, bodies are not symbolized but totemic routes, i.e. the total dynamics which identifies each one of these beings. The stake of their painting is not representing, but producing for the observer a creative emotion, a significant coincidence which engages his destiny. The pictograms constitute also a writing, in the ordinary sense : the word "being" for example («be», in english) will be represented by a bee.